I have decided to stop posting so much of that #GoodIntelshiznit on TWATTER & FACECROOK because of their censorship and ghosting of my post. I will now post most of my research on my own blogs where they can be shared and read properly.  Today let’s start with the fact that we have information that AIDS was INTENTIALLY inserted into the vaccine to destroy people’s immune systems. We have plenty of cross-references from multiple sources to prove this fact. You can find most of my INTEL reports by going to Bing and typing in Agent Freak Nasty or even better just tell at least 10 people to BING Agent Freak Nasty. They can censor EVERYTHING including your text messages and emails. Google Bitches have most of them censored, WTF does that tell you???

Jimstone a former NSA analyst does intel reports and has a new site jimstoneindia.com.

This particular ambulance which is rigged with an old soviet naval mine that has Ukrainian inventory markings, had a mishap before it could finish whatever it was doing and the entire thing was left abandoned.

VAX DAMAGE On the tennis court

A TOTAL OF 15 TENNIS PLAYERS AT THE MIAMI OPEN COULD NOT COMPLETE THEIR GAMES DUE TO “PHYSICAL STRESS” AND OTHER OBVIOUS VAX-RELATED REASONS. USUALLY, THEY NEVER LOSE A SINGLE PLAYER. FANS ARE STUNNED, AND ANSWERS ARE NOT BEING GIVEN BY THE SCAMMING MSM. They just said “One guy got a blister on his foot” and another player was “stressed”. What happened to the other 13 that had to quit mid-game?? This is what a Pfizer future looks like.

The Alphabet People Wants to Turn us Into Borgs 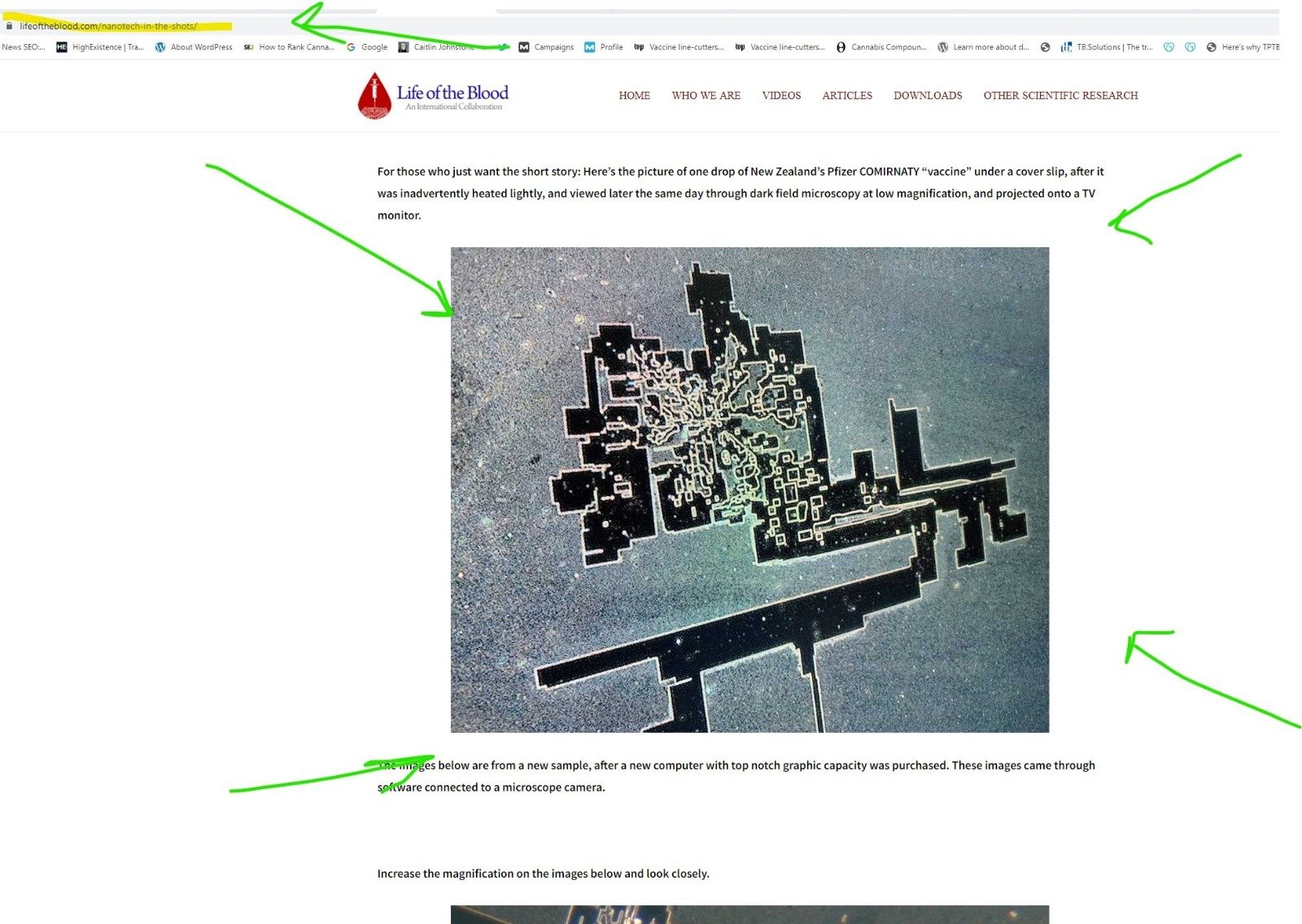 You can watch the pictures and multiple videos here Who We Are – Life Of The Blood of what they are finding inside people’s bodies. Computer circuits and aluminum self-aware lifeforms. So it looks like they are trying to kill us all and turn the rest of us into BORG machines that can be programmed to be their worker slaves or god knows what.

I recently found out that the CIA used the Bloods and The Crips to move cocaine. We already knew from reporter Gary Webb that this was the case. Well, it goes a lot deeper. It turns out the CIA took over rap music in the early 80s to make it more violent and drug worshiping, as a PSY-OP to get the black community to annihilate itself. Since they own all the judges and for-profit prisons they could make billions and depopulate the black community at the same time. 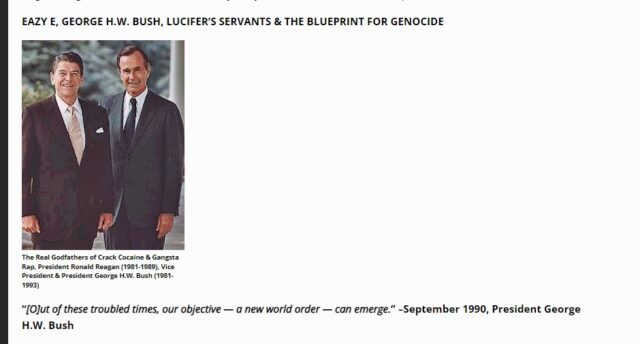 What was I just saying about the GIPPER , CIA and crack again???? …..#Agentfreaknasty #C007NSQUAD pic.twitter.com/5KcuZ5VYer

In 1992, Eazy-E was invited to 1600 Pennsylvania Avenue to lunch privately with CIA Crack Cocaine Iran-Contra conspirator, Republican President George H.W. Bush. It is a puzzle as to what business Eazy-E had to discuss with Lucifer’s servant, former CIA agent, Skull and Bone war criminal, Nazi collaborator, and one of the most covert, treacherous, double-crossing, and dangerous men on earth other than to move crack cocaine/gangsta rap money into the White House from Heller and Klein.

I guess at some point Eazy-E became a liability and they decided to murder him using AIDS. Watch Suge Knight basically confess to it on the Jimmy Kimmel Show.

The interesting thing about what he says is this is the EXACT same thing that is happening to those who took the jab. It is giving them aids. We can assume that Suge Knight got the idea from the CIA with Eazy E. He is also the primary suspect in the death of 2pac since he owned him 20 million dollars and 2pac was about to go start his own label. See: PRIVATE PRISONS AND CORPORATE (C)RAP “MUSIC” (gizadeathstar.com)

He explained that the companies we work for had invested millions into the building of privately owned prisons and that our positions of influence in the music industry would actually impact the profitability of these investments. I remember many of us in the group immediately looking at each other in confusion. At the time, I didn’t know what a private prison was but I wasn’t the only one. Sure enough, someone asked what these prisons were and what any of this had to do with us. We were told that these prisons were built by privately-owned companies that received funding from the government based on the number of inmates. The more inmates, the more money the government would pay these prisons. It was also made clear to us that since these prisons are privately owned, as they become publicly traded, we’d be able to buy shares. Most of us were taken back by this. Again, a couple of people asked what this had to do with us. At this point, my industry colleague who had first opened the meeting took the floor again and answered our questions. He told us that since our employers had become silent investors in this prison business, it was now in their interest to make sure that these prisons remained filled. Our job would be to help make this happen by marketing music that promotes criminal behavior, rap being the music of choice. He assured us that this would be a great situation for us because rap music was becoming an increasingly profitable market for our companies, and as employees, we’d also be able to buy personal stocks in these prisons. Immediately, silence came over the room. You could have heard a pin drop. I remember looking around to make sure I wasn’t dreaming and saw half of the people with dropped jaws. My daze was interrupted when someone shouted, “Is this a f****** joke?”

At some point the FBI.CIA and JDL Jewish Defense League begin shaking down popular singers and rappers demanding money or they or their families will be killed. Watch this video of Vanilla Ice when he was confronted by Suge Knight multiple times until he signed over 4 million dollars from his popular song Ice Baby to Death Row Records. NOTICE and look at his face when he said how did Suge knight now have locations at ALL TIMES. That was because the CIA or LAPD was feeding him the intelligence.

Now we know from MULTIPLE sources that the Vaccine had AIDS intentionally inserted into it, just like they murdered Easy-E it sure looks like the Bill Gates Depopulation method is right on schedule… See the following. 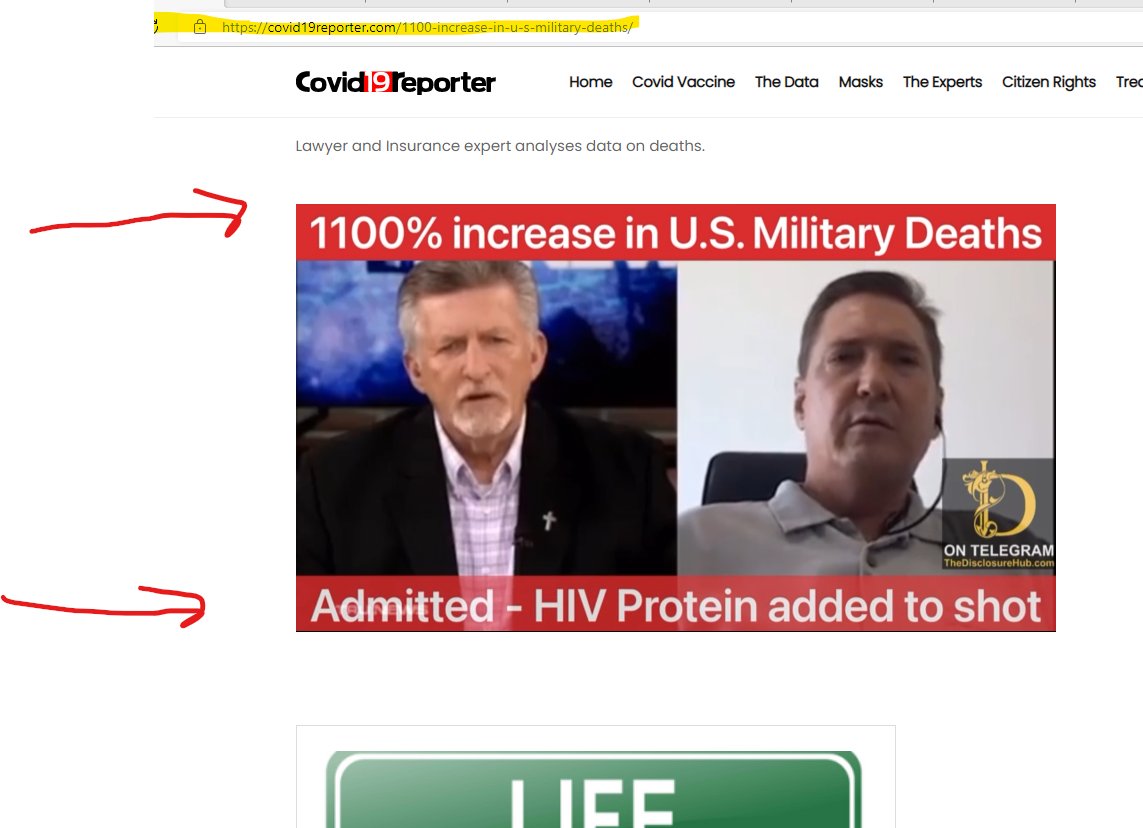 They knew the trial test was killing animals more than a year ago yet they still gave it to us and our children. The Vaccine is no more different than a GUN pointed at your forehead. Defend your life and that of your children as such…..Q-

You want to watch this video below.

Here is the crazy part. Navy Intelligence Officer William Cooper PREDICTED this EXACT same method of depopulation by the elites in his 90s Book Behold a Pale Horse. See The Good news for you TEST TUBE DUMMIES is they said they developed a cure first. So if you live long enough you might be in luck.

William Cooper was a Navy Intelligence officer with the highest Q security clearance who was murdered by the US Government a few months after 911 when he predicted 3 months before 911 they would blame in Osama Bin Ladin. I went back and re-read his book https://t.co/efYj22xZKg pic.twitter.com/CeIV2a7XUF

Other Cure Or Treatment recently discovered by Oregon scientists is CBDA, CBDG, and THCV. See

| Illuminati News | How the CIA and Military Control the Music Industry (illuminati-news.com)

This is how art, music, and film are intertwined with the New World Order Agenda:

1. Let’s say that the Illuminati is ready to move on to the next level of control over the world and they need to indoctrinate people in a new way to have their support. Much of the planning is political and financial in nature and is happening behind the scenes, but two of their most powerful instruments are Hollywood and the Music Industry, because that is where they can reach the masses. So they are deciding to set a new trend to promote their latest strategy.

2. They use mind controlled people (musicians/actors/producers etc.) and other greedy artists, who have sworn obedience to the cause to set this trend, in exchange for wealth, drugs, groupies and/or whatever they want, in order to be satisfied. Those controlled artists and actors are heavily promoted with techniques learnt from Nazi Germany, which developed the most extraordinary techniques to manipulate the masses that this world has ever seen. L. Ron Hubbard, the founder of Scientology, confessed to his disciples in writing that he used Goebbels’ Propaganda Machine to get people into the cult (and keep them there). The Illuminati have no problems promoting whatever they want, and have people respond like they want them to.

3. The “trend-makers” set the direction for the new trends, and people will start worshipping those new idols.

4. Other (often more talented) musicians follow up on that trend and create their own version of the new idea. Those musicians also get contracts with the Record Companies, and can be ordinary people like you and I, who have never been tampered with in mind control programs like MK ULTRA and Project Monarch. Those musicians (and actors) don’t have to be severely mind controlled to unwittingly help out with the Agenda of the Elite. They just jump on the same bandwagon as the trend-makers, and the snowball is starting to roll. Thus, the Illuminati, who basically invented the trend, can sit back and watch. We, the citizens, are doing the rest for them. And of course, there is a financial aspect to it as well; whatever it takes to make an extra buck. Thus, they also sign up artists they know will probably only have one hit and then they throw them out.

5. Other gifted musicians and actors, who are creating art that goes outside the Agenda – or against it – have little chance to get their message out broadly, because nobody at the top of the Industry (where the money is) is willing to promote them. It is the same pattern as within politics. Only those who are promoted by the super-wealthy Elite stand a chance. The International Bankers (The Illuminati) are the ones who own the Industry. As soon as someone outside the Agenda is creating something new (may it be a new type of music trend, a new label with contrary or new fresh ideas) which is either against their interests or a threat in the sense of competition, the Illuminati is quick to buy them out. If the Company or the persons refuse to sell, they are threatened. We all have seen Mafia Movies. That is exactly how it works.

So are we supposed to stop listening to the music we’ve always liked after having read this article? It’s up to each one of us to make that decision, but for mass mind control like this to work, the receiver has to be ignorant of what is going on or it won’t work. I am torn myself, because I love some of the old music from the 60s-70s and I still listen to it with pleasure, but without being indoctrinated and seeing the musicians as heroes. On the other hand, by buying the music, I support this criminal industry, which I don’t like to do. So that’s where I stand, in all honesty.