The Corona Virus The Greatest Psy-Op In History

This thread is based on the twitter feed of Dr. Russel McGregor @killaudeepstate posted around 3-15-2020

Greetings, My name is James Baines and I am the owner of Isenselogic.com, although my website is for internet marketing I pass my spare time writing about world events including the Las Vegas Shooting, 911, and Fukushima. Currently, in the news, everybody is freaking out about the Corona Virus, but I and a group of individuals who follow Q believe that it is a Military Psychological Operation to take down the Deep State. Now before you roll your eyes I employ you to read the information yourself check dates and do your own research. If you do not know what Qanon is I HIGHLY recommend you read this thread on ZeroHedge before continuing https://www.zerohedge.com/political/introduction-q

Also, let’s look at some common-sense arguments. If the virus is as deadly as they claim how can they close sporting events and gatherings of over 10 people but STILL leave WallMarts open where EACH ONE has an average of 10,000 people go through each day?

What about the Mexican border? Mexico, where I live, is currently not under house arrest If people in California are on lockdown what happens when the border reopens and all those Mexicans pour back into the US. Wouldnt they just reinfect California. Do you see how it makes ZERO sense?

How come farm animals who are clustered together and have no ability to cover their coughs are wash their hands aren’t dying by the tens of thousands? Where are the pictures and videos of cows and pigs dying in mass?

How come so many rich and famous people are catching the virus but EVERYBODY we know hasn’t caught shit?

Patriots in Control of the Federal Reserve System 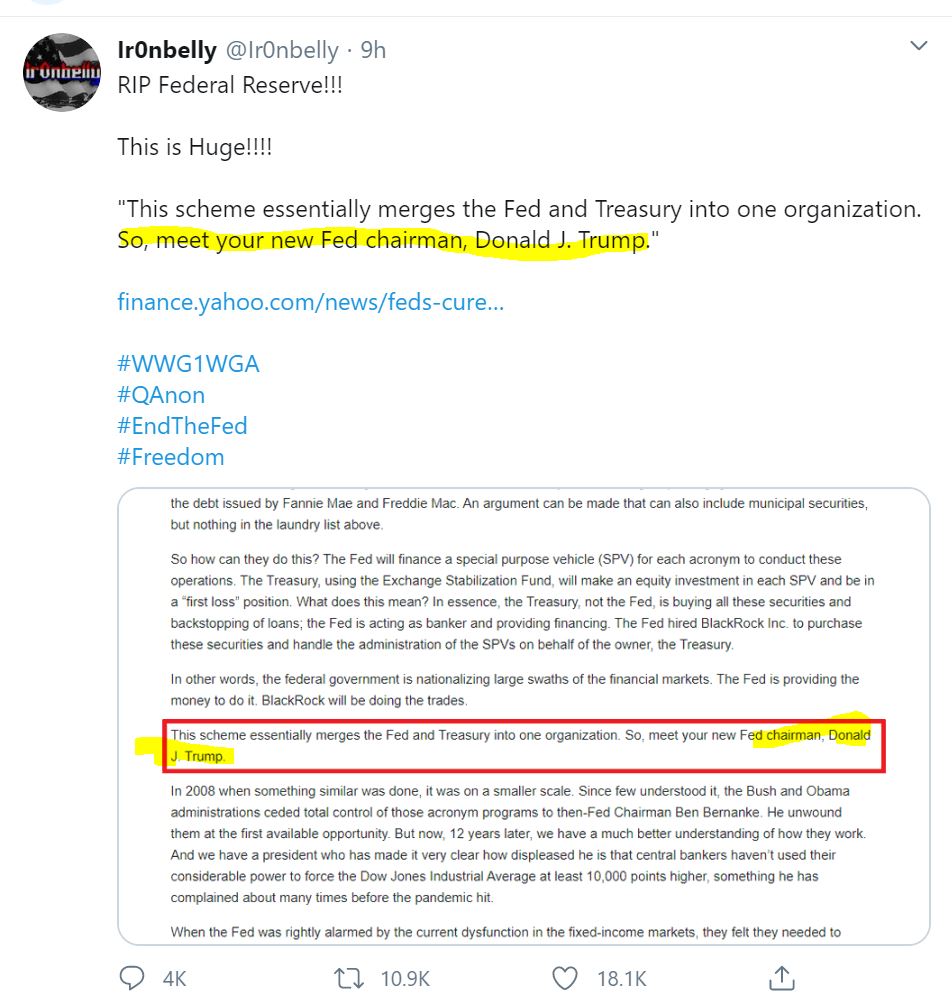 What does this mean for you????

The Federal Reserve put out a video the other day, asking people not to withdraw their money because its safe. Of course, this had just the opposite effect. Banks all over the country are reporting low cash reserves with some banks even restricting how much cash you can take out.

In other words. RUN BITCH RUN!!! and get your money out before it’s gone.

“What most people still don’t get is that the money you deposit in a bank is not yours anymore, it belongs to the bank. The is only 5 to 10% real physical cash available for withdrawal. The bank run has already begun which explains this intervention by the FDIC. Be your own bank!” wrote another.

Here where I live in Rosarito Beach Mexico EVERY BANK had lines around the corner So you have been warned….Q-

This is a further indicator of martial law coming during the 10 days of darkness coming starting April 1st.

News is Prepping for Internet Black Out.

Part of the Prediction is that the Internet and TV will Go out for 10 days starting April 1st.

Both Fox News and ZeroHedge are saying that so many people being home is causing a strain on the internet. Of course, this is bull shit There is much more bandwidth used when people are at work and school.

To me, this is another indicator of the CALM BEFORE THE STORM.

Around March 15th a good friend of mine in Canada named Ruby messaged me a twitter thread about how the entire Corona Virus scare was fake and being used as an excuse for a worldwide military operation. Although I found it interesting I didn’t give it much thought until today. On March 15 Doctor Russel Mcgregor predicted that the virus scare would be over by Easter Weekend and low and behold today President Trump came on TV and predicted the exact same thing. With that, I will let you dive into the information yourself. I will be updating this blog daily so CHECK BACK and please share! You can follow me on Twitter at @dispensaryexch

Sars COV-19 or the Corona Virus is a military Psy-Op designed to cover the arrest of the deep state as described The Storm by Q Anon post that began around in November of 2017.  It is a real virus but causes little damage. The virus can be problematic but only in those with serious co-morbid disease- almost exclusively the ELDERLY. Having said this-preventive measures should be undertaken until POTUS gives the all-clear. Antivirals, such as remdesivir, will be useful in ICU treatment. The virus was designed by the Deep State at the University of North Carolina, Fort Detrick, and AAHL, Geelong.

However. the virus has been neutralized by white hat operators. Two of the four HIV inserts have base pair additions to ameliorate the ‘Gain Function of the Virus’ China, Iran and Italy are all working with Donald Trump and the white hats. They have together as a group manufactured the crisis by controlling the release of Psyop disinformation. Remember Italy was involved with #Spygate and need to make amends. Most of the deaths will have already had intercurrent influenza, which is why conservative influenza treatment/prevention is important.

China purposely released te virus at the designated time with the purpose to create PANIC as a cover for the military operations. Quarantines will be staggered throughout major cities. For example, Sidney will likely be quarantined on March 18th, 2020. This level of action will be entirely inappropriate for the actual risk posed. The Main Stream Media which is controlled by the Deep State will be hoping the virus is deadly and will destroy Donald Trump Politically. It is not deadly and will not have the desired effect they hope for. The Main Stream Media will ramp up the PANIC because they have no choice because most of them are heading to prison for treason. They are under the false impression that the virus is in its original deadly form, before being nurtured by the good guys.

During the quarantine period, there be a silent simultaneous arrest of evil low-level deep state facilitators. These include MS-13 Canberra Raiders and others. These evil individuals will be put in Quarantine camps run by the white house military. An example of the United State locations is here. 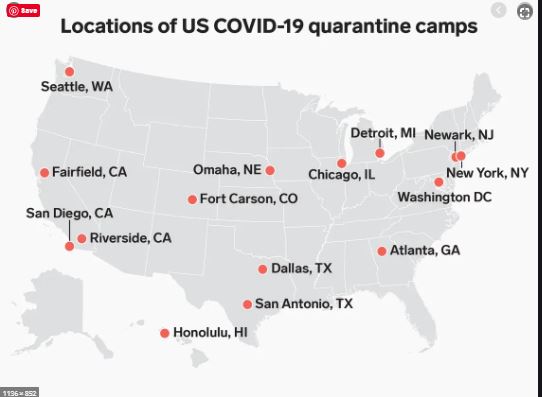 The public will not be told of the arrest. although some have already been announced. Silence is strategically the best option. The worldwide city by city quarantine will be staggered and will all end on April 10 (Easter Friday). Included in this operation will be 10days of darkness which will begin on April 1st (morning) and end on April 10th, 2020.

Immediately before the start of darkness, President Trump will tweet “My Fellow Americans…. the Storm is upon us ….” April fools day will lessen the initial worries about darkness occurring. When darkness occurs there will be peak COVID-19 panic and medical martial law worldwide. Most of the Medical Quaranteens will have been in place in most major cities for some time before April 1st, 2020. Many people will be self-isolating at home. Most families will already have prepped for food water and other essential supplies. In Australia, the unemployed will be given $750 dollars on March 31st, 2020. Other countries will have emergency contingencies also so few people will die of starvation. Some emergency shops will stay open to provide supplies if needed but generally, most shops will be closed.

During the 10 days of darkness, there will be no social media or the internet. There will be electricity but no TV or radio. No newspapers will print, The military of each country will shut these down since most are controlled by the Mossad or CIA. President Trump will have the ONLY available method of communicating with the public worldwide throughout the 10 days of darkness and that will be done through the emergency broadcast system. Each military worldwide will transmit this to Televisions and other devices in their respective countries. 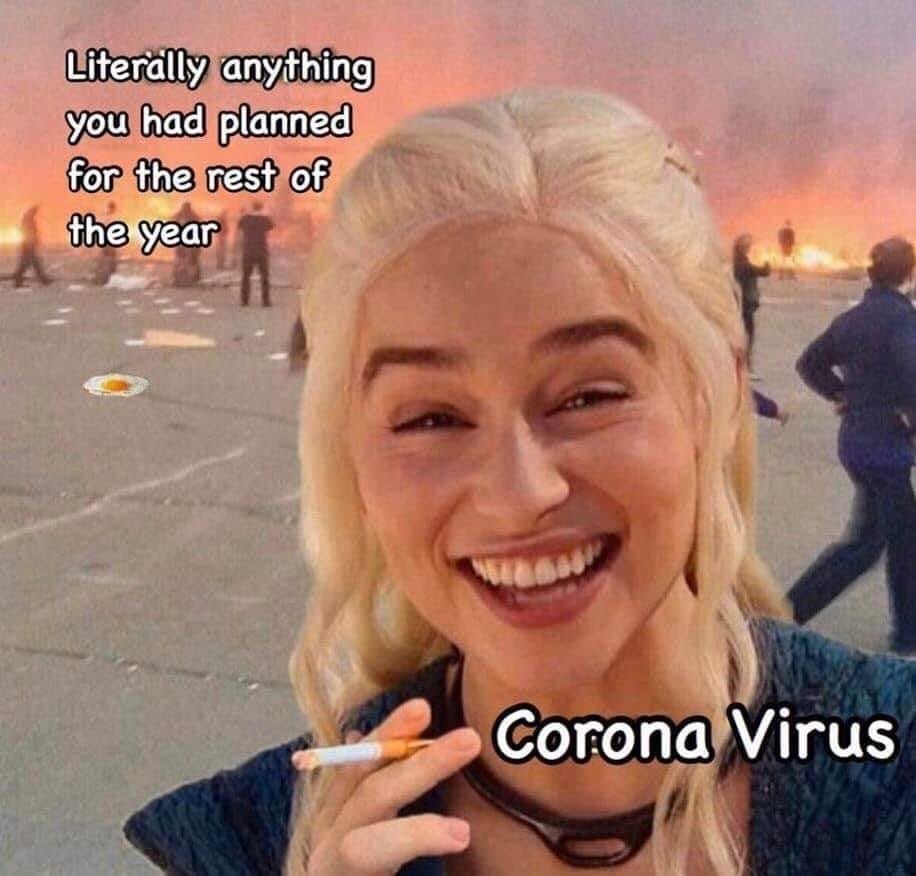 President Trump will either be overseas or aboard Airforce one during the days of darkness for optics. The reason or excuse to be on Air Force One will be for his safety from infection of the virus. The electronic broadcasting system will be transmitted from Air Force One. There will effectively be a total news blackout except for President Trump. Professionally made documentaries will be transmitted on the EBS to TV’s, devices, smartphones worldwide. The content will lay out all the crimes and horrors and details that Q has eluded too. It will indisputable information.

President Trump will detail how e was asked to run the US Military to take down the Deep State and that he is not a “Politician” He will verify the Q dissemination program. These documentaries will include taped confessions of famous Deep State Politicians and elites. The structure of world control will be outlined. Evidence of crimes will be presented. Military Tribunal outcomes will be known. The presentations will occur for 8 hours a day for 10 days straight.

Repeats will occur for the rest of the day so that shift workers/emergency workers will not miss the show. The Electronic Messaging Service will be 24/7. Families will have nothing else to do but watch. The most heinous videos/proofs won’t be for all to see and can be watched later on the internet, after the 10 days of darkness completes. There will be time to reflect on each day of these 10 days. There will be a mass shock. disgust and confusion. Our role as Patirios will be to provide a sense of calm, validation reassurance and compassion. Many Patiros previously too scared to talk will be able to do so. It is unlikely but possible that JFK Jr and others will add to the veracity of the operation. When the 10 days of Darkness finishes on Easter Friday there will be a mass outpouring of spirituality.

On Easter, Friday te people will be told te virus is now safe and it is okay to venture outside and assemble. Churches, Synagogues, and Mosques will be filled. There will be much grief but also a relief. A small percentage – perhaps 5% will be too progressively deranged and brainwashed to accept the truth. They will try to riot, as usual. However, they will soon realize ‘The People’ are far more righteously angry, disciplined and potentially violent.

Update 3/25/2020 Trump announces he hopes the pandemic will be done by Easter. HUGE PROOF

The Deep State will lose control of the streets forever. The Military will guard TV stations/ newspapers to avoid vandalism. After the blackout, the mainstream media will be completely exposed and will not attempt to counter the narrative. The Deep State actors who did not flip and snitch or sent to GITMO will engage in the suicide weekend 11th and 12th of April 2020. Recalcitrants will be left to fend for themselves in front of the informed masses.

There may be an economic reset within the 10 days of darkness with the ending of the Federal Reserve Institution and a move to the gold standard.

I will update this thread daily so check back!

33 reasons why Corona virus is fake

The Most Corrupt Prosecutor In US History?
February 25, 2020