The Most Corrupt Prosecutor In US History?

Is Mark Lindquist the most corrupt prosecutor in US History?

Former prosecutor Mark Lindquist doesn’t seem to know a lot about works ethics. While still running the prosecutor’s office in Pierce County, Washington, he been alleged to have abused his power and acted maliciously against not only citizens but members of his own office and police officers. His unethical actions came to light when a respected veteran member of his own office filed a whistleblower complaint against him, in 2015. 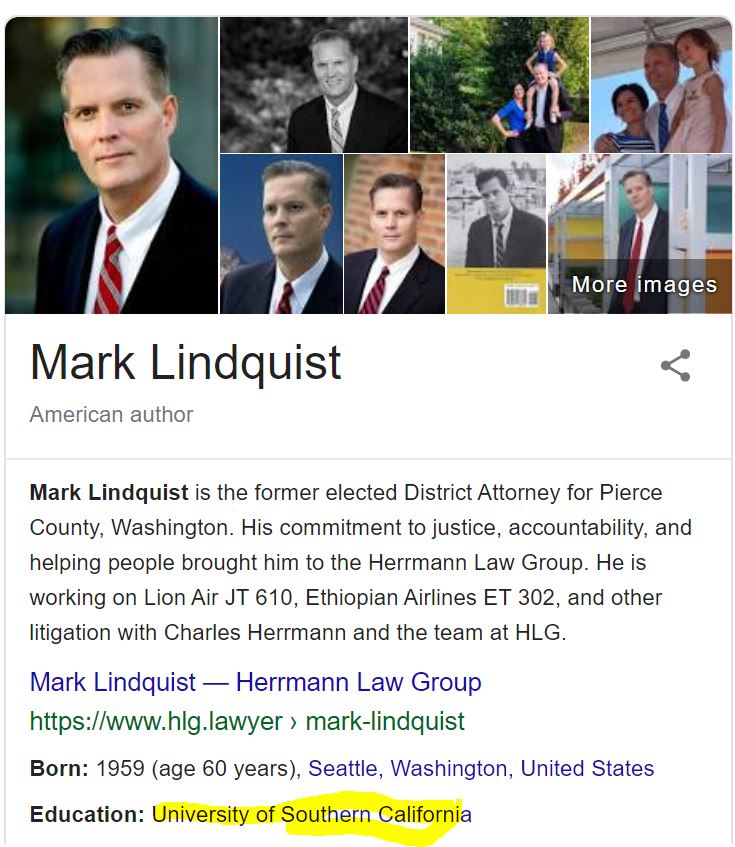 Mark Lindquist The Most Corrupt Prosecutor in US History?

At that time, Steve Merrival, a veteran deputy prosecutor with almost 40 years of experience, stated that he was filing the complaint in the hopes that one day, the prosecutor’s office could “re-establish trust, serve the people and do justice.” Something that Lindquist and other representatives of the justice system certainly don’t honor.

But what else has prosecutor Lindquist done to earn his fame as a corrupt civil servant even among his peers? During his time as a prosecutor, he allegedly and systematically incurred in many misconducts, and he also mismanaged and illegally politicized the prosecutor’s office. He’s accused, for example of applying Brady disclosures in a “vengeful and selective way” to his convenience and many times, to harm police officers that have criticized his methods.

One of the most outrages allegations of Mark Lindquist was when he refused to prosecute a child pornography case becase the detective who presented the evidense didnt vote for him.

Nissen became so frustrated with Lindquist’s actions, including firing a longtime deputy prosecutor and refusing to prosecute a child pornography case Nissen uncovered, that she complained to The News Tribune publisher in an email and asked the newspaper to investigate Lindquist.  See: https://www.courthousenews.com/officers-say-prosecutorruined-their-careers/

One incident that evidence Lindquist’s total lack of principles and moral values is the one linked to the tragic murder of four Lakewood police officers in 2009. (https://en.wikipedia.org/wiki/2009_Lakewood_shooting). According to several witnesses, while the people mourned the untimely death of the four policemen who were on duty, Lindquist bragged about these murders be the perfect source of free publicity for him, specifically “$100K in free publicity” for his then-coming reelection campaign.

But not only did Lindquist show lack empathy for his co-workers in the law and order system, he also showed his character as a vindictive person, trying to harm people who contradicted him or confront his illegal tactics against innocent defendants. Let’s take the example of the Lynn Dalsing case in 2010. Michael Dalsing, Lynn Dalsing’s husband was convicted in 2011 on charges of child rape, following his arrest in 2010 for the alleged sexual abuse of three minor girls, one of them being Dalsing’s own daughter, who was 7 years old when the events happened. Subsequently, Lynn Dalsing was charged with molesting her daughter, based on a picture that, according to prosecutors, showed her on a bed with the girl.

Nevertheless, a sheriff’s deputy later testified that the females on the picture were not Lynn Dalsing and her daughter, but the picture was from a pornographic series circulating on the internet. Lynn Dalsing states that Mark Lindquist directed Deputy Jared Ausserer to maliciously prosecute her in 2010 on the base of false allegations and deceptive information. Though the charges were dismissed, Mrs. Dalsing was prosecuted a second time in 2013. It was ordered by Lindquist, as retaliation for her success in a non-related civil lawsuit. The Superior Court judge who dismissed those charges in March called it a case of “prosecutorial vindictiveness.”

In 2015, Lynn Dalsing filed a federal lawsuit against Lindquist and deputy prosecutor Jared Ausserer for the violation of her constitutional rights through a malicious and vindictive prosecution. The lawsuit would be subsequently dropped.

Lindquist went even further, talking publicly and in an inappropriate way, on a TV show, about the defendant of a murder case, whose trial closing arguments would be presented on the very next day. Prosecutor Lindquist appeared on the infamous legal TV show Nancy Grace, known for making fun of defendants of notorious crimes. Lindquist talked widely and gave his personal opinion on the murder case of Danielle Nemetz, whose husband Skylar Nemetz was charged with first-degree murder in 2014.

Lindquist’s appearance on the TV show caused outrage in the bar association, who filed a complaint against Lindquist, stating that his actions had violated the professional principles and standards for prosecutors, and his opinions in the show could have influenced the jury decisions.

LindBitch admitted his wrongdoing in this case and received an admonition from the bar, which is the least severe sanction that could be applied. Unsurprisingly, it’s said that Lindquist didn’t show any remorse for his actions. Ultimately though, all the controversy and turmoil surrounding Lindquist’s two terms leading the prosecutor’s office could have influenced his defeat before Mary Robnett in late 2018.

Though he’s not a prosecutor anymore, the non-disbarring of Lindquist and the leniency of the sanction applied to him for his wrongdoings only shows the American judicial system is slowly decaying. Even though Lindquist is not a prosecutor anymore some of the same judges he bragged about placing in office instead of the voters are still active in Pierce County. Not surprising Lindquist is now working for the Law Firm of Hermann Law group where he conveniently files lawsuits in Pierce County like the one filed by a Ex-Police officer for a vapping illness. There are no doubts that there are many more corrupt prosecutors in the judicial system but Mark Lindquist will leave a record than can hardly be beat.

Article Name
The Most Corrupt Prosecutor in US History.
Description
Mark Lindquist also is known as the Grand Wizard, is known to have committed many unpunished crimes against citizens and even his own police officers working for his city.
Author
Agent Grandpa Freak Nasty
Publisher Name
Isenselogic.com
Publisher Logo

How Does a Dispensary Calculate there ROI For SEO
September 5, 2020

The Corona Virus The Greatest Psy-Op In History
March 25, 2020